Influencing in the South

Before summer, the Capacity to Influence for Change Project (C2I) headed south for the next installment of their Theory of Change training with ACT partner associations.

Earlier this year the ACT C2I team visited the towns of Matmata, Gabès and Medenine to run training sessions as part of a foundational training course in social justice and advocacy.

The goal of the course is to “raise awareness of how systems can hinder or promote justice and the role citizens can play in influence change”, according to the Project Manager, Anne.

This is the second installment of sessions in a series. One of the activities from the first session involved participants being given pictures representing systemic problems. Different images were used to depict the reality of the situation in Tunisia, working with examples such as traffic problems or unemployment – an engaging and accessible way everyone can join in with.

During the second set of trainings, participants – made up of disability centre staff, self-advocates, parents of people with disabilities and activists in the community – took part in an exercise aimed at demonstrating how all are responsible for their own situation.

All have a role unique to them.
It’s only by working together that change becomes attainable.

One activity made use of a mapping tool: the goal of this is to show who responsibility lies with and whose voice needs to be listened to the most. This is a powerful understanding to reach for those whose voices are often overlooked or not given due attention.

ACT staff member Syrine was invited to join in the fun. Here’s what she had to say about the experience:

“The participants came across initially a little shy – but they were all interested. Over the sessions, everyone engaged well with the materials they were being presented with. The activities were fun and interactive; participants really got into the swing of things, moving around and encouraging each other to engage with one another.”

Along with those in attendance at one set of sessions were a number of UTAIM Medenine staff and their director. “The fact that so many [staff] showed up to participate shows that they want to see change in their work,” says Syrine. “It was clear to me that participants were keen to apply what they were learning in their own fields.”

They want to see transformation in their workplace and with those they’re working alongside, with and for.

Feedback to the sessions has been encouraging. Many are keen to continue their development, seeking to implement their learning so as to impact tangible, real life change in their workplaces and their wider communities.

It is truly an honour for ACT to play a part in these remarkable participant’s stories. We are grateful to all who have taken part so far. 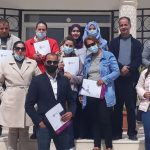 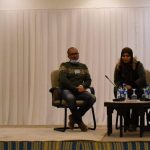