The Minister of Women, Family and Children Naziha Laabidi and the Minister of Justice Ghazi Jeribi attended the opening of the new workshops for female inmates in the Bulla Regia Prison in Jendouba, which took place on Friday 21st September.

The exhibition, in which some of the handicrafts made in workshops run by ACT, was an initiative undertaken by the Ministry of Women.

Through this project, ACT has been working for several years in this prison and has performed workshops with female inmates.  Last year, the Ministry of Women decided to make an investment of 50,000 dinars to improve these workshops. Two new ones were also able to be opened.

The Prison Project helps rehabilitate and equip women prisoners in Tunisia by offering training and learning opportunities through different workshops. We are hopeful that it will lead to greater opportunities for employment and integration once released. Developing skills such as these before leaving prison enables the women who take part to have a greater hope for a better future.

Here is the Minister of Women examining a selection of the embroideries made by the women ACT has been training, alongside an ACT Project Worker and many other guests. 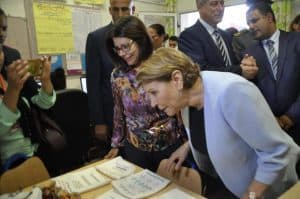 “We were able to show the ministries a nice selection of products made by female inmates in the workshops,” says the project manager. “These workshops were financed and equipped by ACT.”

ACT is grateful to the financial support this ministry has offered to the prison. We are excited to continue working in partnership to transform the lives of women inmates across the region.

ACT is currently running projects in prisons in El Kef, Jendouba and Sfax