The realities of raising a child without much (if any) help and support can rob you of hope. ACT is seeking to help transform the future of a group of mothers by equipping them to build their own futures.

Launched last year, ACT’s Mothers Without Family Support project (MWFS) has been busy since day one. After an initial selection process, two groups of mothers in Monastir and Nabeul are being trained to build and run their own microenterprises.

The training, facilitated by ACT and in partnership with Voix de l’Enfant Nabeul (VEN) and Voix de l’Enfant Monastir (VEM) has been focussing on equipping women to develop their own ideas and skill sets.

“The ideas need to come from [them]”, says project manager Hajer. “ACT and the centres can help, but the hope needs to come from within.”

Some mothers want to use their skills as a baker. Some to sew and mend clothes. Some to produce traditional Tunisian clothing, like in the pictures below. Each mother has come up with her own initiative and is now focused on making it a reality.

Sitting in on a training session recently, it’s hard to not be struck by just how marvellous these women are.

In all, 13 women were attending from different parts of the region. All were different ages, from different backgrounds. All mothers. All wanting to see their lives changed.

These women respect each other. They listen when someone else talks. They have smart answers. They are united in their passion for their different initiatives. They support each other in a very authentic and humbling way.

They are committed to the trainer, from Espace Entreprendre Monastir, Mme Samira Boughammoura’s way of thinking:

Thoughts of no, maybe, if… these are not allowed. ‘We succeed’ is our mentality.

Thinking outside the box

The end goal of this series of trainings is to enable these mothers to think like business women. Asking and answering the how, why, when, who and what of any possible venture.

They use tools such as riddles and optical illusions, and now these women have started to see how looking at problems from different (at times unexpected) angles can at times give you creative solutions.

There are still many challenges ahead. Practically, there can be issues with childcare. With literacy. With other competing opportunities for short-term income. With travel, both in time and distance.

There are many hurdles to jump for each project as well. Sourcing materials, preparing work areas, funding possibilities, community acceptance and support.

ACT is committed to the empowerment of mothers without family support through this project. We want to see social and professional transformation take place for these mothers. We want to equip them to be able to provide a reliable income for their families. We hope for improved self-image and developed life skills for these women.

In September this year, Nabeul was severely hit by floods unlike any seen in recent years. Many families lost everything.

In response to this emergency, ACT project work with the centre there was put on pause. The centre itself was being used as a place to store and sort donations. Clothes and other resources were collected and distributed as fast as was possible. It was an intense time, and consumed a lot of energy.

ACT wanted to help with the relief work. Just over 2000 TND was raised, and donations of clothing and equipment were taken to Nabeul. Some of ACT’s other partners (Nour el Hayat and Bright Women’s Association of Today) also pitched in and were also incredibly generous in their contributions.

“All sorts of people came and wanted to help,” says project manager Hajer, who coordinated the efforts. “It was important to get people on their feet before getting on with the project; for things to be sorted at home first, to allow them to continue.”

Thankfully, training has now resumed and the project is continuing. 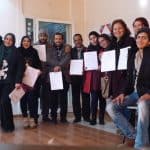