Responding to the unexpected

When Coronavirus started to spread, global communities were confronted with uncertainty. In these unprecedented times, help has been given to some of the most vulnerable in Tunisia – something desperately needed at such a time.

In March, Tunisian authorities – like the rest of the world – had a critical choice to make in response to the threat of Coronavirus. In order to stamp out the risk faced, much of everyone’s day-to-day normality needed to be altered drastically. With an already fragile public healthcare system, Tunisia could not afford a nationwide outbreak.

Having successfully contained the Covid-19 virus outbreak, a very different threat loomed – curfews, confinement and travel bans had led to financial uncertainty, economic instability, job losses and hunger. Those most impacted were already amongst the most vulnerable. The unemployed. The poor. The elderly. The orphan. The widow.

Relief efforts sprung up almost as soon as the virus appeared, allowing ACT to show many that their circumstances and suffering were not unimportant – that they had not been forgotten.

As has been shared previously, ACT has been using the unexpected pause in our project schedules to mobilize a relief effort. “The months of April, May and June have seen us work in ways we are unfamiliar with, learning lessons and deepening relationships as we go,” says General Director Adriaan.

We are especially thankful for all the hard work ACT team members have put in during this time, as they have stepped up to serve the marginalised and vulnerable in El Kef, Tunis, Nabeul, Monastir, Sfax and Gabès. Almost 40 years of working in partnership with local organisations and initiatives has proved good training for the relief efforts!

Each month we looked to replicate and adapt, evaluating, learning lessons and building off of what has already been undertaken.

633 families were helped in April.

925 families were helped in May.

We have started our plans to reach 908 families in June.

We hope to finalise the actual distributions in July

No one could have predicted the global impact of the last few months. The giving, prayers and engagement of the many has made a huge difference to families and communities across Tunisia. All the above efforts were made possible thanks to the kindness and generosity of supporters from around the globe. For this and more, ACT is incredibly thankful.

Some of ACT’s regular project activities are already tentatively starting up, and we are hopeful to have even more start in September. We hope that the restrictions on travel and meeting in groups will be relaxed in time for the new season to get underway.

The past three months have been difficult in many ways. None the less, for ACT it remains a great privilege to have been able to help and serve in the ways listed above. Each volunteer, each partnership, each ACT team member, each act of support – whatever their size – has made the incredible possible.

ACT looks forward to exploring and establishing our role in Tunisia’s new normal. 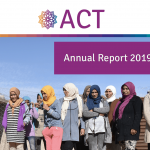