That’s what we celebrated in 2017 as an organisation, together with former general directors, former staff, partners and supporters of ACT. We welcomed almost 100 international guests and honoured more than 40 locals, representing different associations ACT partners with both currently and in years past. God is faithful hearing the stories of the 35-year work in Tunisia! It was a privilege meeting many of you who have contributed over all these years to see were ACT is today. Check the pictures in the middle of this report in case you missed this great event; or if you want to re-live some of the Celebration 2017!

The Celebration in 2017 also marked the completion of the transition of ACT becoming an International NGO continuing to work in partnership with International Partners (formerly Member Bodies). The board completed a process of two years in which a lot of work has been done preparing ACT for a new era: revising the constitution, re-activating our Swedish registration, opening bank accounts, looking for new board members, supporting the ACT-UK Support Office and inviting new members are just a few of the important jobs that have been done! Chapeau, or as they would say in Tunisia; Mabrouk!

ACT-Sweden started in 2017 to operate as ACT’s Head Office with a separate budget, administration and a place for the board and members to meet. It’s great to be back on the soil were ACT started and to see an increasing group of Swedes getting involved with ACT again. Back to our roots! ACT-Tunisia continued in 2017 to be the main Country Office building on the ‘foundations’ laid in 2016. We re-started the Sfax team, new staff arrived, a five-year agreement was signed with the Ministry of Social Affairs and new project work was launched for Mothers without Family Support. These are just a few examples of how the ‘construction’ of ACT happened in 2017, along with all the ongoing work in our projects which you can read about in this Annual Report 2017. Enjoy the stories; I hope they inspire you to continue to support our work.

ACT-UK was established in 2017 as the first Support Office with the aim of promoting and profiling ACT in the UK. We are very thankful for the trustees in the UK, who are building a network of ACT friends. They are also raising funds through different events such as concerts and sponsored walks. Thank you, UK!

All these different entities of ACT in Sweden, Tunisia and the UK make up ACT International and are all vital parts of a body passionate about serving and seeing the lives of people transformed. With 35 years of history, hundreds of people supported over these years and thousands of prayers said by many of you, we feel blessed and thankful! Let’s keep up the good work together!

May God bless you all! 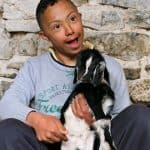 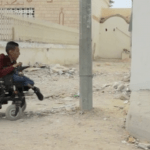